Fraport causes destruction – all over the world 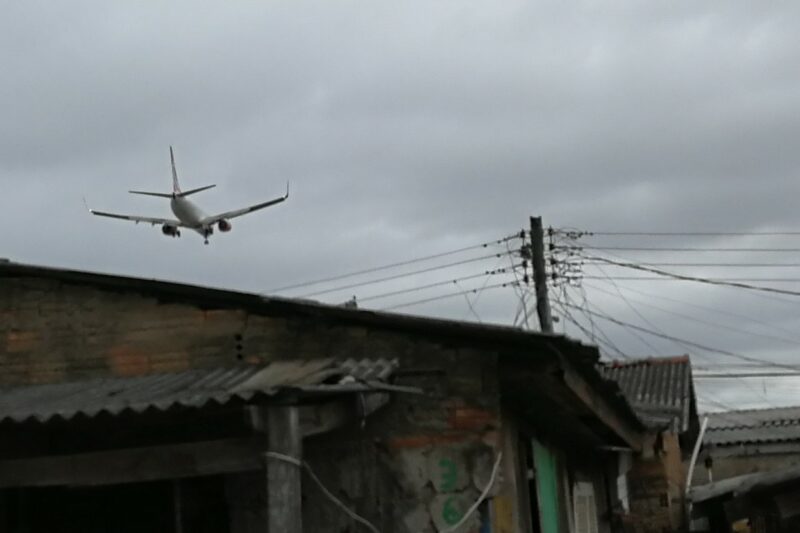 Fraport causes destruction – all over the world

Air travel might currently be significantly reduced, but as soon as this crisis is over it will be out of control again. Fraport, the German company operating Frankfurt Airport and still expanding worldwide, celebrates its plan to eventually make all its airports “climate neutral”. Even if this was possible, who is it kidding? Of what use are 30 “climate neutral” airports if they provide the basis for climate-wrecking air travel?

Fraport does not only wipe the climate and a liveable future off the table. It does not care about human rights either: one of the runways is to be extended at its Porto Alegre’s airport in Brazil. Vila Nazaré, a village home to more than 5,000 people, has to give way to this extension. According to the company, 95% of the inhabitants have agreed to a resettlement and 75% have already been moved.

The story we heard from the people concerned sounds very different. Since the first settlements more than 50 years ago, Vila Nazaré is an urban area where working families live and know and help each other, often under hard living and working conditions. It is an intact community where solidarity thrives amongst the poorest. Fraport is tearing this community apart by relocating its inhabitants to two distant neighbourhoods; one of these, Timbaúva, is controlled by criminal gangs that have announced that they will shoot everybody from Vila Nazaré. Both areas lack basic infrastructure (such as schools and jobs), the accomodation provided by Fraport is still not ready, and water and electricity bills are unaffordable for the families.

The “agreement” claimed by Fraport resulted from pressure by military police, destruction of the local infrastructure and the shutdown of schools and medical services. As soon as a family leaves its home, it is immediately demolished: the on-site situation is described as a “war scenario”. This endangers the water supply, which is specially crucial in times of the Covid-19 pandemic. Additionally, a lot of people have lost their jobs or wages due to the virus and are struggling even more.

In the midst of all this, Fraport is as presumptuous as ever. It has been denying its responsibility concerning Vila Nazaré for years, but during its last shareholders’ meeting, on May 26, their audacity reached an all-time high. Despite everything that is happening in Porto Alegre, Fraport dared to say: “For many of the people there it is the first time to have a clean and safe home now.” To break this down: Fraport deprived citizens of their homes, their livelihoods and everything they had and now presents itself as their saviour.

Furthermore, the chairman of the supervisory board, Karlheinz Weimar, repeated the claim that people inhabited Vila Nazaré illegally – a lie that has long since been refuted: https://www.kritischeaktionaere.de/fraport/vila-nazare-im-widerstand/ (in German). It followed the same old story about Fraport not being responsible for anything and shoving off all responsibility to Brazilian authorities. However, it had to admit that a resettlement is obviously “more than pure administration” and that it tried to “avoid long bureaucratic processes”. They sure did with their course of action!

When he was asked about the gangs in Timbaúva, Weimar denied all knowledge regarding crime statistics in the area and could hardly pronounce the name of the district. Moreover, he denied all knowledge regarding the existence of a new settlement area close to Vila Nazaré, where the community could stay together and have a secure livelihood. The people of Vila Nazaré have demanded from the start to at least have this area as a third resettlement option; so, either Fraport never talked to these people or is plainly lying. The cost of the relocation process to date was estimated by Fraport to be 6 million euros – just enough to pay the yearly salary of two members of their management board. This year, the company plans to spend 40 million Real (about 7 million euro) on infrastructure in the new areas.

What was completely ignored during the shareholders’ meeting were the recent legal developments: last year, it was confirmed by the public prosecutor’s office of Brasil (MPF) that Fraport Brazil, a subsidiary company of Fraport, has to pay for all the costs relating to the resettlement of the inhabitants of Vila Nazaré, including the reimbursement of the full housing value. They additionally informed Fraport that evictions or resettlements without consent must not happen anymore (https://www.kritischeaktionaere.de/fraport/vila-nazare-im-widerstand/, in German). Yet, the company seems to be ignoring this completely.

To not let Fraport get away with this, local citizens’ initiatives against the airport expansion in Frankfurt and the German group “Am Boden bleiben” (campaigning for climate justice and a drastic reduction of aviation) organised a demonstration during the firm’s shareholder meeting. Solidarity with the people of Vila Nazaré was shown in the following video: https://www.youtube.com/watch?v=LuNuWSB2UGs (in German).

Dear people of Vila Nazaré: you are not alone!

Fraport: you are being watched. Shame on you!